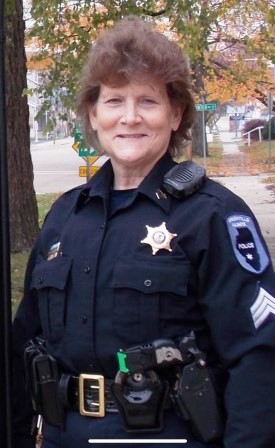 Deb Keserauskis was a dedicated officer on the Greenville Police Department for over 30 years.

She retired one year ago and passed away this past Sunday at the age of 66.

She became the first female officer in the department’s history with Chief John King, who stated she was an excellent addition to the department in 1990. He said she was a good police officer that happened to be a woman, not a woman trying to make it in a man’s world. He said she served the whole community very well.

Chief Lou Lorton said Deb was a very dedicated to the department. He shared a story of the time she volunteered to take on a project to update the department’s rules and regulations manual. He said she did an amazing job on it while still fulfilling all of her other duties. He said she was caring in many ways and as a person was always willing to help.

Police Chief Scott Workman said Deb was simply a good person and said everyone knew her and enjoyed being around her. He said she’s missed already.

Visitation for Deb Keserauskis will be from 4 to 7 p.m. Saturday at the Greenville First Christian Church. Services begin at 7:30 p.m.