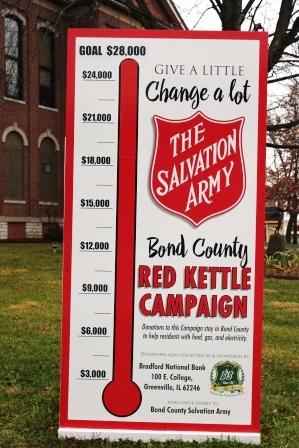 Mary Young, coordinator of the bell ringing campaign, told WGEL the total was $34,698.46. She said that’s the second year in a row the community has answered the call. She said she’s heard that giving was down around the country. 85% of the funds raised stay in Bond County to help residents in need. Young also noted she had 99% of the time slots filled to ring the bells.

Three bell ringers received $100 for their efforts. The money did not come out of the overall donations, but was donated by someone as an incentive for bell ringers.

The winners were Pollyanna Feezel, Laura Klein, and Veronica Ross.

Bell ringing occurred at four locations in the county. They were Casey’s in Mulberry Grove, and Buchheit, Dollar General and Capri IGA in Greenville.

Young stated the total is expected to rise as donations can still be sent to or dropped off at the Bradford National Bank main facility in Greenville.