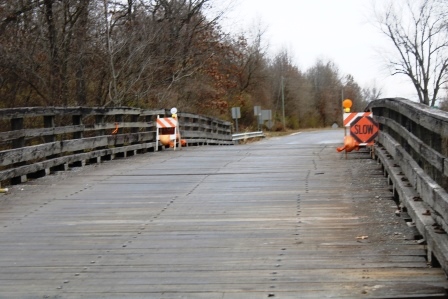 The wooden bridge on the Red Ball Trail, north of Greenville, was a topic of discussion at Tuesday’s Bond County Board meeting.

In attendance were concerned residents Marlin Wade and Barb Smith.

There are currently barricades on the bridge to slow down traffic.

Bond County Highway Engineer Jeremy Pestle said during his annual inspections last week, he discovered part of the deck has gotten bad on the bridge. He has put measures in place to prompt drivers to slow down, because, he said, if motorists continue at the speed some have been, the bridge will “beat itself apart”. He said he has contacted the railroad company, which is in charge of maintenance for the bridge. He said he believes the project will take some time, and he hopes not to have to close it. He said he has watched it almost every day since he discovered the issue and it has not gotten worse.

The bridge is owned by the BNSF Railroad and goes over tracks. 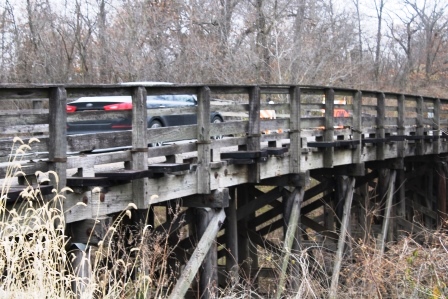 Plans are underway for a new bridge to be built. Pestle said he hopes that can get underway next year.

Pestle said once the repairs are made to the current bridge, he will remove the barricades.