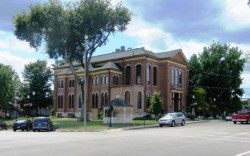 The Bond County Board met Tuesday morning and approved a new labor contract with employees in the highway department.

By a vote of 4-0, the three-year contract with District Number 9 International Association of Machinists and Aerospace Workers was accepted. Adam Boudouris, Wes Pourchot, Jacob Rayl and Joe Whalen voted in favor while Gerald McCray was absent.

Board Chairman Boudouris told WGEL the new contract includes a 75 cents per hour pay raise in each of the first two years of the contract. He indicated the new contract has been approved by the highway workers.

The county is also negotiating a new contract at the Bond County Sheriff’s Department. Following an executive session Tuesday morning, it was announced the board has decided to make a counter offer to the Illinois FOP Labor Council.