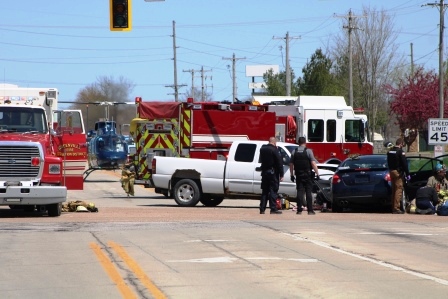 According to Illinois State Police, the head-on accident occurred when a GMC pickup truck traveling westbound on Rt. 40 allegedly failed to yield and attempted to turn left onto Rt. 127, striking a Nissan head on.

The driver of the Nissan, 23 year old Breaunnika Marble of Greenville, lost her life in the accident. Three passengers in the Marble car were transported to the hospital for treatment of injuries, as was the unidentified juvenile driver of the pickup truck.

The accident diverted traffic for several hours at the Route 40 and 127 Intersection and happened just after 1PM Saturday. Greenville Police along with Greenville Mulberry Grove and Pocahontas fire personnel responded to the scene.

The accident remains under investigation by the Illinois State Police.