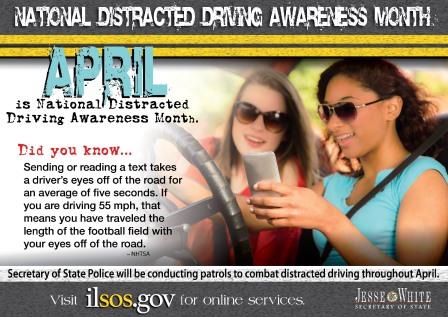 “With the increased use of technological devices, distracted driving has become a serious problem on the roads throughout our state and the nation,” said White. “No driver should be texting while driving.”

In an effort to further discourage distracted driving, White has instructed the Secretary of State Police to conduct targeted patrols statewide to crack down on distracted drivers.

“The goal is not to write tickets, but to save lives,” said White. “We are reminding the public of the dangers of distracted driving, and police will be issuing tickets to motorists who are driving distracted.”

Illinois law prohibits the hand-held use of cellphones and electronic devices in vehicles, unless reporting an emergency or while the vehicle is parked. Texting while driving is considered one of the most deadly forms of distracted driving. The penalty for texting while driving results in a moving violation that will be reflected on the motorist’s driving record, in addition to fines and court costs.

According to the National Highway Traffic Safety Administration (NHTSA), distracted driving accounted for 15% of crashes and claimed the lives of 3,142 motorists in the United States in 2019.

The NHTSA has reported that sending or reading a text takes a motorist’s eyes off the road for an average of five seconds. That means when travelling at 55 mph, a motorist is essentially driving blindly for the length of a football field.