It has been seven years since the City of Greenville’s police department had a K-9 Unit.

The program is coming back with donations from the St. Louis area foundation known as Ten8 Project.

The foundation is offering a dog, kennels for the K-9 officer’s residence and the police car, dog food, and equipment needed for the canine, plus training.

New City Manager Jo Hollenkamp said she was surprised when she learned the police department did not have a K-9 Unit. She noted K-9 Units are an inexpensive and legitimate way to add another officer to the police force.

Chief of Police Stefan Neece said the K-9 unit will be a big addition to the department. He said the police department is always looking at ways to improve what they do and want to offer the best service to the community. He said a canine officer will enhance that service.

Andy Moulton, representing Ten8 Project, said the foundation has been in existence about six months and this is the third department it has helped with a K-9. 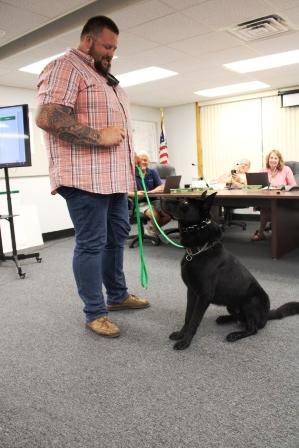 He said the non-profit foundation donates police dogs to police departments to help them make sure they have the tools they need.

Moulton introduced the council to police dog Noro, who was recently obtained by the foundation from the Ohio state police.

Chief Neece announced the city’s K-9 officer will be Jacob McClintock, who has been with the Greenville Police Department since January.

Total donations from Ten8 Project amount to over $27,000.

The city will repurpose its 2014 Expedition as a K-9 squad car. It has been used recently by the city’s code enforcement officer.

Moulton said his foundation has about 90 percent of the items needed for the vehicle.

The council agreed to pay Code Enforcement Officer Jeff Ketten for mileage and Officer McClintock an additional three and one-half hours per week for care and maintenance of the canine.

Chief Neece hopes the K-9 unit will be available in two to three months.