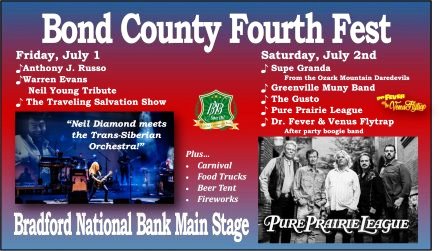 The headlining band for this year’s Bond County Fourth Fest is the national group Pure Prairie League, which will perform Saturday at 8 p.m.

Jeff Leidel talked with Mike Reilly, who has been with the group since 1972, but unfortunately will not be at the Greenville show.

Reilly was asked about the group’s name and the Norman Rockwell paintings that graced many of its early albums.

“The name came from an Errol Flynn movie from 1939 called ‘Dodge City’, and ‘Pure Prairie League’ was a women’s temperance union that used to parade down the streets of the most lawless cities in the Midwest, proclaiming that ‘Lips that touch liquor will not touch ours’,” he said. “And then we were sitting in RCA Studios in New York, in 1971 when we did the first record, and John Call was sitting with a promotion gal and they were trying to figure out, basically, an album cover design for the band…the art director at RCA at the time was a good friend of Norman Rockwell, and he brought in this book of Rockwell Saturday Evening Post cards. And as soon as we turned to the page that had that Saturday evening Post cover from August of 1927, John Call went ‘This is it!’ So we contacted Rockwell, got permission from Rockwell and the Saturday Evening Post, and that’s been our logo ever since.”

Pure Prairie League has had many hit albums and two Top 40 hits, the most famous being “Amie.” “It was released in ’72 when the album came out, but not to a huge amount of playing.” He told WGEL. “We decided to continue, at the time we were signed with Variety Artists out in Minnesota, who was the largest college booker in the country. And, we hit the road and started doing 250-280 college dates a year. So, the fact that we did that for about 5, 6, 7 years, and jamming ‘Amie’ down every college student’s throat was instrumental in the actual success of that song becoming a classic. The college radio stations were actually instrumental in getting that song popularized all over the country. And then your bigger radio stations started to pick it up. By that time, by 1975, RCA was going ‘Wait a minute, this band has a hit and they’re not even signed to us anymore, we gotta find them.’ RCA re-signed us in ‘75 and we did the Two Lane Highway album and many albums after that.”

As for what to expect at Saturday’s concert, Reilly said, “We’ll do a good, long show and we hit on songs from all the records. We’ll have a couple of new tunes in there that we are planning on putting out, hopefully by the end of this year. It’s a good show, the band’s hitting on all eight cylinders and the singing is great, which, you know we’ve always been a vocal band, so the musicianship is top-notch. I don’t think anyone is walking away disappointed.”

All music at Fourth Fest, Friday and Saturday July 1 and 2 in downtown Greenville, is free.