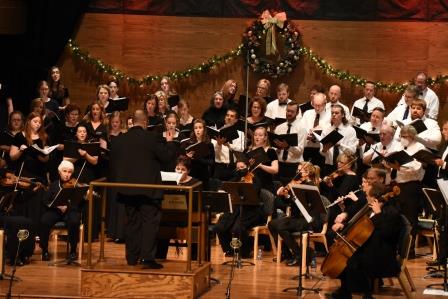 The concert will include many of the choruses and solos in the three-part masterpiece. The 60-voice choral union and the 20-piece orchestra includes members from several south-central Illinois communities in addition to students, staff, and faculty members from Greenville University.

“This year’s performance will include the majority of Messiah, which we only do about every few years,” says Don Frazure, GU’s director of choral activities. “We will sing the gospel message from the foretelling of Christ’s birth by the prophets all the way through to the second coming and eternal reign.”

Doors open for the concert at 3:30 pm on Sunday, December 4, 2022, in the Whitlock Music Center on the campus of Greenville University. The concert begins at 4 pm and is free and open to the public.

Immediately following the concert there will be a reception at the Tidball Alumni House on the Greenville University campus (at the corner of College Avenue and Elm Street). Light refreshments will be served, and all are invited.

Before the performance of the Messiah, the GU Jazz Band will kick off the weekend of music on Saturday, December 3, with a holiday concert.

“There will be something for everyone,” says Alex Kirby, GU director of bands. “The band is looking forward to spreading holiday cheer by playing all your favorites such as “Deck the Halls,” “We Three Kings,” and many more played in a variety of styles.”

The holiday jazz band concert begins at 7 pm on Saturday, December 3, at Toastiez restaurant on the Greenville Town Square.

The following weekend, the Marching Panther Regiment will showcase the “Marching Band Spectacular,” an indoor concert highlighting favorite game time pep tunes as well as the marching band’s 2022 field show titled, “Colors.” The concert highlights all aspects of the marching program, including special performances by the color guard and drum line. The Marching Band Spectacular will also feature a surprise unveiling of the future look of the Marching Panther Regiment!

The Marching Band Spectacular begins at 7 pm on Friday, December 9, at the Whitlock Recital Hall on GU’s campus.