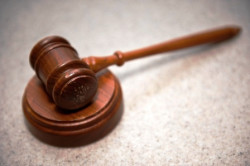 Tristine J. Hampton pleaded guilty to a count of controlled substance trafficking, a Class 1 felony, and was given eight years in the Illinois Department of Corrections. She must serve 75 percent of the term.

Hampton also pled guilty to two counts of bringing contraband into a penal institution, a Class 1 felony, plus aggravated battery. With the sentences on those charges, the defendant faces a total of 13 years in the IDOC.

State’s Attorney Dora Mann said as part of the plea negotiations, she dismissed five other charges against Hampton.

Greenville police arrested Hampton on a traffic stop December 11, 2022. An inventory search of the vehicle led to drugs and drug paraphernalia being found.

State’s Attorney Mann reported, once the defendant was at the jail, two different bags containing fentanyl capsules and methamphetamine were found on Hampton’s person.

After Hampton consented to a search of her phone, law enforcement found several messages relating to purchasing and selling fentanyl and methamphetamine.

State’s attorney Mann praised the Greenville Police Department and Bond County Sheriff’s Department for their work on the case.