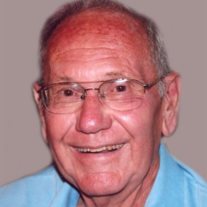 Born at the family home and reared in Troy, IL. Graduated from McCray-Dewey High School, Troy, IL, in 1951. He served with the US Army from 1953 to 1955 during the Korean War. He worked at the Commonwealth-Edison and Shell Oil Refinery, as a Insulator; later he worked out of Local #1, St. Louis, MO. He retired in 1994. He coached his sons in baseball. He played baseball for the Troy Red Birds. He was a faithful follower of the St. Louis Cardinal Baseball Team. He truly did enjoy his grandchildren. He enjoyed cutting firewood. “He enjoyed the fellowship of family and friends, our lives are richer because he shared his life so fully. He will always be with us in spirit.”As people were leaving he always told them “Give Me A Smile.”

He was preceded in death by:

Interment will be at St. John the Baptist Cemetery in Troy, IL with Military honors by Highland VFW and Highland American Legion Posts.

Memorial contributions may be made to Masses; CELTIC Hospice (formerly VNA/TIP).