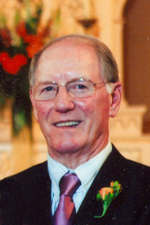 In addition to his parents he was preceded in death by a brother, Marcellus Ottensmeier; a sister, Dot Kirkland; and a sister-in-law, Paula Ottensmeier.

Bernie was a dairy farmer at heart. He was considered an expert in Holstein pedigrees and breeding to improve milk production. His herd won numerous awards at cattle shows and fairs. After selling his herd, he worked countless hours as a farm hand for many local dairy farmers. No matter the circumstance, Bernie was dedicated to his job rarely missing a shift; truly someone who you could count on…Loved those cows. Anyone who met Bernie felt his warmth and there was not a stranger that he did not meet. Bernie loved softball, spending much time both playing and coaching. He enjoyed listening to local music talent and if you were lucky enough to get asked, he would twirl you around the dance floor. He also enjoyed playing cards and visiting the local eateries around the county and formed lasting friendships.

In lieu of flowers, memorials may be made to Clinton County Relay For Life or to the Donor’s Choice and will be received at the funeral home and church.