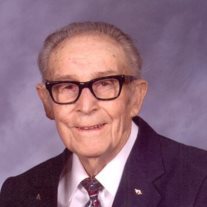 Burnell was born at Highland, grew up on a farm between Highland & Marine. He farmed with his father until 1948, at which time he began working at Marine Grain Elevator. He spent thirty-five (35) years as manager of the elevator under the ownerships of Valier-Spies Milling Company, Alhambra Grain and Feed, Illinois Grain Corporation, and Madison Service Company. He retired in 1982. Burnell was a life-long active member of the Marine United Church of Christ having served on the Church Council for many years and as a member of the Men’s Fellowship. He served also as a member of the Hitz Home Board of Directors.

Burnell was an honorary past Master of Marine Masonic Lodge #355, a member of the Scottish Rite Bodies Valley of Southern Illinois and Ainad Temple ( Shriner’s) of East St. Louis. He was a Shriner of the Year of the Silver Lake Shrine Club in 1990. He joined the Marine Volunteer Fire Department in 1950 and serviced the department for 26 years (as president for four years). Burnell was a member of the Marine Cemetery Board for 33 years.

As a youth he played baseball with the Decks Prairie ball club, the Marine Club and the Highland Merchants, and softball with the Marine UCC Ball Club. Burnell enjoyed attending and watching Cardinal baseball games.

Upon retirement, he enjoyed traveling and collecting/restoring antiques. His work can be found in other states as far away as California and Washington, as well as in articles in the magazine “Country Living”. His collections include primitive tools, marbles, Marine history, coins, and others. In recent years, he and Linette were called upon often to tell the story of Marine and its past; Burnell’s account of flour making in Marine covers more than 100 years of that industry.

Many Cousins and Friends

He was preceded in death by:

Memorial contributions may be made to United Church of Christ of Marine; Charity of Donor’s Choice.