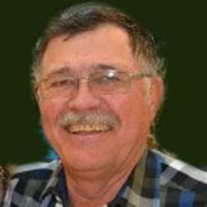 On Saturday, September 05, 1964, he married Judith A. Hartlieb (nee Durr) who survives.

Born at Highland, IL; reared on a farm east of Grantfork, IL and graduated from Highland High School in 1960. He served with the US Army with duty in Texas from 1960 to 1961. He worked for Clyde Weder Implement Company; Kesner Gas Station, Marine, IL; 10 years at Molitor Motors (Ford), Collinsville, IL; 1974 began working for Tri-Ford, Highland and retired in 2005. He restored old cars and trucks; one of them is his 1934 Dodge pickup truck. He also built and flew ultralight.aircrafts. He enjoyed camping, boating, fishing and hunting.

Funeral service will be at 10:00 AM on Thursday, July 03, 2014, at Grantfork United Church of Christ in Grantfork, IL, with Rev. Tim A. Darmour-Paul, Pastor, officiating.

Memorial contributions may be made to Relay For Life-Team “Myeloma Maniacs”; Meals On Wheels; or Grantfork United Church of Christ.