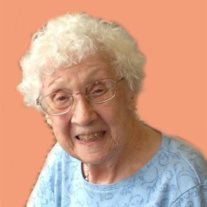 She was born February 03, 1925, in Cologne, Germany the daughter of Heinrich and Katharina (nee Derikartz) Bernards.

She was a member of Immaculate Conception Catholic Church. She was also a member of Ladies Auxiliary to the Highland-Pierron Fire Department; International Women’s Club.

Born and reared in Cologne, Germany. She received the Citizens Purple Heart during WWII. She came to the states in January of 1952, with no knowledge of English; later naturalized in 1956. She helped her husband operate their dairy farm. She was very influential in their children’s education, making sure they all received a college education. She loved to travel: Germany, Europe, US tours, Hawaii and taking cruises. She enjoyed competing and medaled in breast stroke swimming in the Senior Olympics. She was a breast cancer survivor. For some 5 years she worked at Michael’s Restaurant as a waitress.

She was preceded in death by :

Funeral Mass will be at 10:00 AM on Friday, June 13, 2014, at Immaculate Conception Catholic Church in Pierron, IL, with Father Scott A. Snider officiating.

Memorial contributions may be made to Hospice of Southern Illinois; Alzheimer’s Foundation; or the American Cancer Society.