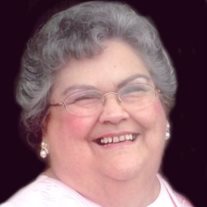 On November 05, 1960, she married William Delano Schlegel Sr. who survives.

She was a member of NCO Wives Club @ Scott AFB;Former Scout Leader.

Darlene was born and grew up in East St. Louis, IL. She was a graduate of Eastside High School. She worked for her father at Provow Grocery Store on State Street in East St. Louis. After her marriage, she followed her husbands Air Force Career with military tours including Thailand. From 1966 to 2003 they lived in Cahokia, and moved to Highland in 2003. She enjoyed reading, crossword puzzles, the home shopping network, bowling and Volunteered for HIS KIDS. She loved her grandchildren and great grandchildren very much and will be missed greatly.

Memorial funeral service will be at 7:00 PM on Wednesday, July 02, 2014, at Spengel-Boulanger Funeral Home in Highland, IL.

Interment will be at Jefferson Barracks National Cemetery in St. Louis, MO at a later date.

Memorial contributions may be made to H.I.S. KIDS.