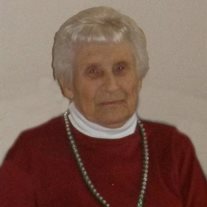 She was born on Saturday, December 10, 1921, in Alhambra, IL, the daughter of John and Katherine (nee Henschen) Braundmeyer.

On Sunday, March 03, 1946, she married Herbert H Schmidt who survives.

Mrs. Schmidt was born and raised on the family farm east of Alhambra, IL, where she lived her entire life. She raised her family and cared for her parents until their death. Mrs. Schmidt worked part-time at the Hitz Memorial Home in the Laundry Department for 15 years. Elda enjoyed crocheting, piecing and quilting

Memorial contributions may be made to Salem Cemetery; or Salem United Church of Christ.