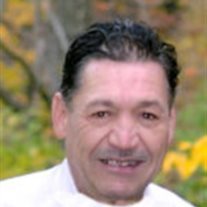 He was born September 26, 1963, in Highland, IL, the son of Darrell Filmer and Jean Marie (nee Zobrist) Rinderer.

He was also a member of Loyal Order of the Moose #2479 in Highland – Highland Sportsman Club.

Jay was born and grew up in Highland. He was a 1981 graduate of Highland High School where he played Baseball and Football. He attended Rend Lake College on a Baseball Scholarship. After college he worked at Trobitt Decorating, Fox Creek Golf Course, an Environmental Company cleaning oil spills in the Gulf and Chicago, Morgan Linen in 1991, Broadway Tavern from 1994-2000, Meat cutter at Grantfork Meats. He played American Legion Baseball and Softball Leagues in Highland. He enjoyed fishing. He was an excellent Skier, and avid Blue’s Hockey Fan, and loved his daughters very much.

Funeral service will be at 10:00 AM on Tuesday, June 24, 2014, at Spengel-Boulanger Funeral Home in Highland, IL, with Rev. Gary Kniepkamp officiating.

Memorial contributions may be made to Education Fund for Arielle and Calie.