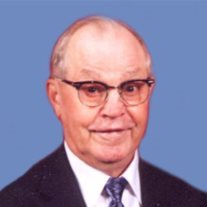 On September 28, 1949, he married Viola Velma “Tootie” Merkle who survives.

He was a member of Evangelical United Church of Christ. He was also a member of Member of Church Brotherhood; Weinheimer Senior Citizens; IMRF Chapter 31.

Roy was born and reared at Highland, IL. He worked at Hug Trucking Company, Basler Electric, Polar Ice and Fuel for 25 years, City of Highland for 15 years, Ken’s Greenhouse, and retired from the city of Highland in 1987. In his earlier years, he helped make hay and shuck corn for area farmers. He also mowed lawn for several people. In 1950, he built his home on Deal Street, where he lived with his wife all of their married life. He was a former Boy Scout leader. Loved to fix things, dance, travel, and spend time with his family; especially his sons and grandson, and adored his wife of 64 years. He enjoyed playing checkers, horseshoes, dominoes, and fishing. He also loved his 1954 blue Chevy pickup truck and his 1939 John Deere Tractor.

Funeral service will be at 10:00 AM on Saturday, June 28, 2014, at Evangelical United Church of Christ in Highland, IL, with Rev. Christopher W. Hill officiating.

Memorial contributions may be made to Evangelical United Church of Christ.