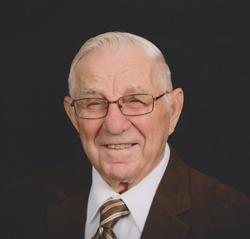 Mr. Hermsmeyer was born on March 6, 1927, in rural Carlyle, a son of William C. and Bertha (Reinkensmeyer) Hermsmeyer. He married Shirley R. Langel on October 22, 1955, at Bethlehem Lutheran Church in Ferrin and she survives in Carlyle.

He was preceded in death by his parents – William and Bertha Hermsmeyer; a daughter – Cheryl A. Holsapple; 2 sisters – Leona Nehrt and husband Clifford and Ellen Kraus and husband Eric; and his in-laws – Elmer, Eldon, Delmar, Joan, Dorris and Ruth.

Mr. Hermsmeyer was baptized, confirmed and married at Bethlehem Lutheran Church in Ferrin, where he held many offices. He served on the board of Ferrin Co-op and was a trustee of the Meridian Township Board. Wib served in the United States Army during the Korean War, and was a dairy and grain farmer. After retiring from farming, he did carpentry work and was a talented woodworker.