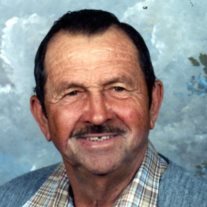 Alfonso “Finn” Buvarskis, age 91, of Keyesport, passed away Wednesday, July 23, in Carlyle Healthcare Center. Funeral services for 91 year-old Alfonso “Finn” Buvarskis will be Monday, July 28, at noon, at the Donnell-Wiegand Funeral Home in Greenville. Burial will be in Payne Cemetery. Friends may call Monday, from 10:00 a.m. until service time at the funeral home. Memorials are suggested to St. Jude’s Children’s Hospital.

Finn, the son of Stanley and Marcella Shimkis Buvarskis was born October 22, 1922 in Pittsburgh, Pennsylvania. He grew up in Naperville, Illinois and attended the local schools. At the age of 18 Finn served our country during WWII in the United States Army. He served in Normandy and was honorably discharged after the war.

Finn and Mary Gum meet in Chicago, Illinois and were united in marriage on February 19, 1943 in Chicago. They enjoyed almost 57 years together before her death on January 2, 2000. Finn worked as a heavy equipment operator in Chicago. He was an operating engineer for Local 150 in Chicago and retired in 1986. Finn and Mary purchased a home in Key West after his retirement and lived there until 1988 and moved back to Tamalco, Illinois. They enjoyed traveling to Texas in the winters. Finn served as a first responder for the Keyesport Fire Department for many years and was a member of the Keyesport American Legion.

Finn was preceded in death by his parents, wife Mary, siblings Anna Palzr and Francis Shuck.