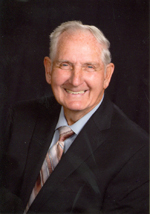 Charles G. Rakers, age 75, of Aviston, passed away Tuesday, July 29 at St. Louis University Hospital. A funeral mass of Christian burial for 75 year old Charles G. Rakers will be held at 10:00 a.m. Friday, August 1 at St. Francis Catholic Church in Aviston. Burial will be in St. Francis Cemetery. Friends may call from 3:30 to 8:00 p.m. Thursday, July 31 and from 8:00 to 9:30 a.m. Friday at the Hempen Funeral Home in Aviston. There will be a prayer service at 3:30 p.m. Thursday and the Fire Department will visit the funeral home at 7:00 p.m. Memorials are suggested to Central High School Football and Track or to a charity of the donor’s choice.

Mr. Rakers worked for Markus Cabinet in Aviston, then worked 38 years for Aviston Lumber in Aviston before retiring from Centralia Correctional Facility as a Central Management Services Garage Foreman. He was a veteran of the United States Army Reserves, a member of St. Francis Parish, a retired member of the Aviston Fire Department, a former Village of Aviston Board Member from 1983-1989, the former Mayor of the Village of Aviston from 1989-2009, a current member of the Clinton County Board, and a member and former chairman of the Clinton County Republican Central Committee. Charles loved being at his clubhouse, “Rakers Acres”.