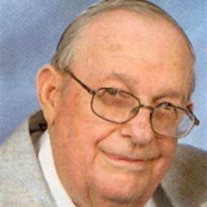 He was born October 26, 1924, in Highland, IL, the son of Clarence and Lettie (nee Haley) Gruenenfelder.

Cliff was born and grew up in Highland, IL. He attended Highland High School. In March of 1943 he was inducted in the US Army and served in the Infantry during WWII in Europe. After his military hitch he later operated a Taxi Service and Pool Hall. He worked for Ford Motor Co. in Hazelwood, MO in the 1950’s. He was a Laborer until 1965, when he joined the Highland Police Dept. In 1973 he worked at the Army Depot in Granite City as a Security Officer, retiring in 1990. He enjoyed fishing, playing cards, bowling, Cardinal baseball, and was very active in the VFW and American Legion. He had donated a total of 23 gallons of blood, and Volunteered for Meal’s on Wheels. Clifford never missed a parade and put US Flags around town and participated with Military Funeral Honors.