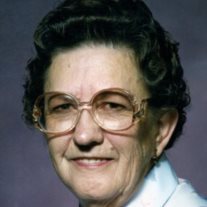 Emma Ellen, the daughter of Jesse Jerry and Laura Ellen (Ray) Coyle, was born December 31, 1925 on the family farm in Old Ripley, Illinois. Emma was 20 months old when her mother died and was raised by her grandparents, Water and Jane Ray.

She attended the one room school at Round Prairie and attended Old Mt. Nebo Baptist Church. She was a hard worker, raised thru the depression – farmed, milked cows and raised hogs. She worked at De Moulin Brothers in Greenville for 22 years retiring in 1988. For the last few years she lived with her daughter Kathryn of Greenville.

On August 22, 1946 Emma married Eldon A. Mollett who preceded her in death on August 11, 1980. She is survived by her children; Kathryn Langford of Greenville, Janice (Doyle) Quick of Terrapin Ridge, Wilma (Wayne) Beckert of Sorento, Eldon (Bev) Mollett of Pocahontas and Melvin (Rosa) Mollett of Hillsboro. She was the loving grandmother of 6 and great-grandmother of 11.