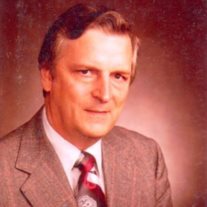 Gerald E. Hammond, MD, age 81, of Highland, passed away Monday, July 21, at St. Joseph’s Hospital in Highland. A memorial mass for 81 year-old Gerald E. Hammond, MD will be Monday, July 28 at 10:00 a.m. at Saint Paul Catholic Church in Highland. Burial will be in Saint Joseph Catholic Cemetery, also in Highland. No visitation will be held. Memorials are suggested to the St. Joseph Hospital Foundation or a charity of the donor’s choice. The Spengel-Boulanger Funeral Home in Highland is in charge of arrangements.

He was born July 27, 1932, in Centralia, IL, the son of Henry Ellsworth and Mabel Madeline (nee Bronson) Hammond.

Dr. Hammond graduated from Centralia High School in 1950, Wabash College in 1954, and the University of Illinois Medical School in 1958. He was a Phi Beta Kappa graduate. He interned at St. Louis City Hospital for 14 months and started practicing medicine at Chester, IL. After of 2 1/2 year, he moved to Highland in 1962 to join Highland Physicians (Hediger/Hammond medical practice). He opened his own practice in 1982 and retired in 1987 after a ruptured brain aneurysm. In 1977 he became interested in computers and enjoyed them for many many years. He also enjoyed photography – he developed his own color prints in 1947. He also enjoyed hunting, golf, fishing, firearms (rifle and hand guns – he loaded his own ammunition). He had served as Chief of Staff at St. Joseph Hospital for 4 terms; Director of the City of Highland Board of Health; Highland Blood Bank’ and was attending physician for Highland’s Disaster Drills. Prior to his retirement he had delivered over 800 babies. Additionally, he had been a member of the Madison County Medical Society, The Southern Illinois Medical Association, the Western Illinois Foundation for Medical Care, the Illinois State Medical Society and the American Medical Association.