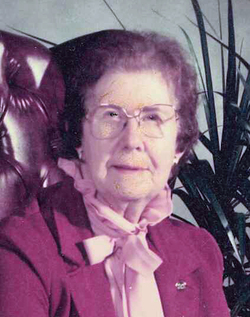 Lila May Mahlandt, age 98, of Carlyle, passed away Monday, July 28, in Glendale, Missouri. Funeral services for 98 year-old Lila May Mahlandt will be Thursday, July 31, at 11:00 a.m., at the Zieren Day Funeral Home in Carlyle. Burial will be in Yingst Cemetery near Carlyle. Friends may call Wednesday, July 30, from 4:00 – 8:00 p.m. and Thursday, from 8:00 a.m. until service time at the funeral home. Memorials are suggested to Yingst Cemetery.

Lila was born on May 26, 1916, in Fulton, Kansas, the daughter of Wallace A. and Jesse I. (Ringer) Rainey. She was named after her maternal grandparents’ daughter, who died in infancy. Lila married Vernon “Doc” Mahlandt on November 21, 1943, at the parsonage of St. John’s United Church of Christ in Breese, Illinois, and he preceded her in death on September 21, 1984.

Except for a couple of years, Lila was a lifelong resident of Carlyle. Her father was the resident superintendant of the Clinton County Poor Farm, where they lived for much of her childhood. She would retell the activities she and her siblings did to entertain the residents or help her parents with the daily needs and duties there.

As a young adult, Lila was employed at the Moran Shoe Factory in Carlyle until Doc and she moved to the farm they purchased on Route 127 in Wheatfield Township. They spent their lives together working long hours and taking great pride in developing their dairy farm. Lila was an avid vegetable gardener and canned much of their produce. She was truly a homemaker and loved living on the farm, and her family always came first. Lila was known for her knowledge of family and friends’ genealogy and stories. These valuable pieces of family lore are treasured and invaluable to those around her, and always put a smile on your face.

Survivors include her daughters – Bonita Worth and husband Bob of St. Louis, Missouri and Jennifer Buchholz and husband Terry of Glendale, Missouri; a granddaughter – Stephanie Caulfield and husband Pat of Fond du Lac, Wisconsin; grandsons – Keith Jannett of Carlyle, and Tyler and Andrew Buchholz of Glendale; great grandchildren – Jack and Rachel Caulfield, and Carly Jannett; and a sister-in-law – Frieda Rainey of Carlyle.

She was preceded in death by her parents – Wallace and Jesse Rainey; her husband – Vernon Mahlandt; a son – Gregory Mahlandt; a grandson – Kent Jannett; her brothers – Walter Rainey and wife Lucille, Floyd Rainey and wife Bertha, and Ralph Rainey; her sisters – Myra Babb Godell and her husbands Albert Babb and Walter Godell, and Mildred Buenemeyer and husband Cyril “Whitey.”