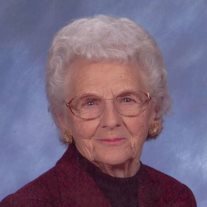 She was born December 21, 1918, in Highland, IL, the daughter of John Miles and Anna Elizabeth (nee Bader) Donnelly.

Priscilla was born at Deck’s Prairie, where she grew up and attended Geiger School. She lived in East Alton for 37 years, then moved to Hickory Flats Area between Highland and Marine since 1975. She had worked at Brown’s Cafe in Highland, Marine Shoe Factory, Olin-Western Cartridge in East Alton; East Alton School District as Cafeteria Cashier. She enjoyed growing and arranging flowers and baking. She won Grand Champion for her Apple Pie at the Madison County Fair and may ribbons for her floral arrangements. She loved her family very much and will be missed greatly.

Funeral service will be at 10:00 AM on Thursday, July 10, 2014, at Spengel-Boulanger Funeral Home in Highland, IL, with Rev. Christopher W. Hill officiating.