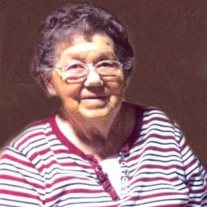 She was born on Saturday, February 16, 1924, in St. Rose, IL, the daughter of Henry A. and Catherine (nee Tebbe) Grapperhaus.

Mrs. Wagner was born and reared at St. Rose, IL. She worked at Deutch’s Powder Egg Company and Moulton Bartley Shoe Factory. She also worked for Agnes Kirstein Catering and Neubauer’s Catering in Highland, where mashed potatoes were her specialty. She enjoyed cooking and quilting. Mr. and Mrs. Wagner had operated a grain and dairy farm. In 1975, after 30 years, they quit the dairy business and retired in 1978.She was also a volunteer at Faith Countryside Homes.

Funeral Mass will be at 10:00 AM on Tuesday, July 22, 2014, at Saint Paul Catholic Church in Highland, IL, with Rev. Fr. Charles A. Edwards, Pastor, Highland, IL officiating.

Memorial contributions may be made to Hospice of Southern Illinois; Alzheimer’s Foundation; Masses.