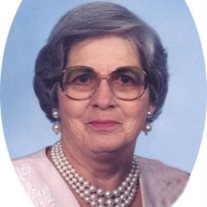 Betty L. Christian, age 85, of DuQuoin, IL, passed away Tuesday, August 12 at Faith Care Center in Highland. Funeral services for 85 year old Betty L. Christian will be Monday, August 18 at Williams Southside Chapel in Southside, Alabama. Burial will be in Southside Chapel & Memorial Park, also in Alabama. Friends may call Friday, August 15 from 6:00 to 8:00 p.m. at the Spengel Boulanger Funeral Home in Highland. Memorials are suggested to the Alzheimer’s Foundation.

She married Robert B. Newborn, and he preceded her in death. In 1973 she married James E. Christian who passed away in 2001.
She was a member of Coosa Valley Chapter of Order of Eastern Star in Southside, GA.

Betty was born and grew up in DuQuoin area. She lived in Alabama from the early 1980’s, and after her husband’s death returned to DuQuoin, IL. She moved to Faith Countryside Homes in Highland, 6 years ago. She loved to garden, sewing and going fishing.