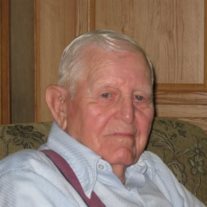 Charles D. Reeves, age 93, of Mulberry Grove, passed away Thursday, August 21, at Greenville Regional Hospital. Funeral services for 93 year-old Charles Reeves will be held at 11:00 a.m. Monday, August 25 at the Donnell-Wiegand Funeral Home in Greenville. Burial will be in McInturff Cemetery with full military honors by American Legion Post 1180. Friends may call Sunday from 4:00 to 8:00 p.m. at the funeral home. Memorials are suggested to American Legion Post 1180 or the Mulberry Grove First Baptist Church.

Charles Dewitt Reeves, the son of Williamette H. Reeves and Emma Verlinda Renfro Reeves, was born on December 6, 1920 north of Mulberry Grove. Charles grew up on the Reeves farm south of Hagarstown and attended the Evans one Room School 21/2 miles from home and Vandalia High School. Charles helped neighbors on the farm then was a welder near Chicago for a time then worked in Vandalia for Boley’s Garage. Charles answered his country’s call be joining the United States Army on September 9, 1942 in Chicago, IL where he rose to the rank of Ssgt. serving overseas for 2 years 9 months and 13 days in New Guinea, the Southern Philippines and in Hiroshima. He was honorably discharged on December 21, 1945 at Jefferson Barracks.

Charles drove for Cassen’s Trucking during the 1950’s, then in 1960 began bulldozing later owning and operating Charles Reeves and Son’s Bulldozing for 23 years. Charles and Louise enjoyed camping in the 1970’s, square dancing in the 1980’s, and wintered in Texas for over 25 years.