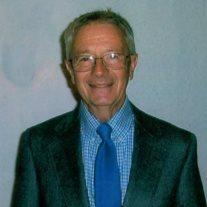 Dan Henry Dauderman, age 75, of Alhambra, passed away Saturday, August 9, at his home. Funeral services for 75 year-old Dan Henry Dauderman will be Tuesday, August 12, at 10:00 a.m., at the Salem United Church of Christ in Alhambra. Burial will be in Sunset Hill Memorial Estates in Edwardsville. Friends may call Monday, August 11, from 5:00 – 8:00 p.m. at Dauderman Mortuary in Alhambra and Tuesday, from 9:00 a.m. until service time at the church. Memorials are suggested to the Memorial Fund at the Salem United Church of Christ.

He was born on Tuesday, April 11, 1939, in Saint Louis, MO, the son of Henry Gustave and Alice Vandalia (nee Alexander) Dauderman.
He was a member of Salem United Church of Christ, Alhambra, IL, Monticello Railway Museum (Life-time Member).

Mr. Dauderman was born in St. Louis, MO; in 1953, the family moved to the family farm north of Alhambra, IL. He continued to operate the grain farm and raise Black Angus cattle until his death. He was an active member of Salem United Church of Christ having served on the Church Council and various committees. Dan loved trains. He was a conductor and passed the FRA test every year. An active member of the Monticello Railway Museum, Monticello, IL, where he volunteered and also served as Conductor for over 34 years. He was a part-time Engineer with a short line railroad. He loved the farm and the outdoors. Camping in the Ozarks, his dog, Robby (an Australian Sheppard). Dan loved antique cars and tractors. Family and friends were always a major concern.