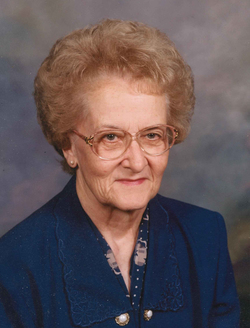 Fern D. Kelso, age 89, of Carlyle, passed away Wednesday, August 27 at Carlyle Healthcare Center. Funeral services for 89 year old Fern D. Kelso will be Friday, August 29 at 1:00 p.m. at the First United Methodist Church in Carlyle. Burial will be in Carlyle Township Cemetery. Friends may call Thursday from 4:00 to 8:00 p.m. and Friday from 11:00 a.m. to service time at the church. Memorials are suggested to the First United Methodist Church or the Juvenile Diabetes Research Foundation. The Zieren-Day Funeral Home in Carlyle is in charge of arrangements.

She was preceded in death by her parents – Soud and Lula Dowell; her husband – Cecil R. Kelso; a son – Dale Kelso; and 2 sisters – Helen Stuber and Hazel McMillan.

Fern was an active member of the First United Methodist Church in Carlyle, where among many other things she helped organize the Matthew 25 Food Pantry. She retired as assistant cashier from First National Bank in Carlyle, and was involved in her children and grandchildren’s lives. Mrs. Kelso enjoyed life as a resident at the Carlyle Healthcare Center for the past 10 years.