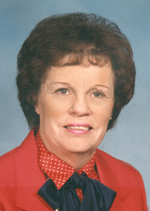 Irene D. Buscher, age 87, of Aviston, passed away Thursday, August 7. Funeral services for 87 year-old Irene D. Buscher will be Monday, August 11, at 10:00 a.m., at the St. Francis Catholic Church in Aviston. Burial will be in St. Francis Cemetery, also in Aviston. Friends may call Monday, from 8:30 a.m. until service time at the church. Memorials are suggested to Aviston American Legion Auxiliary. The Hempen-Nordike Funeral Home in Aviston is in charge of arrangements.

Mrs. Buscher was a homemaker. She was a member of St. Francis Parish and the American Legion Post 1239 Auxiliary in Aviston.