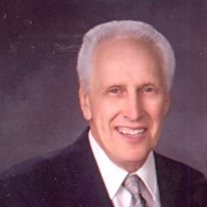 Larry B. Hickey, age 77, of Highland, passed away Saturday, August 16, at Faith Countryside Homes in Highland. Funeral services for 77 year-old Larry B. Hickey are Saturday, August 23, at 10:00 a.m., at the Evangelical United Church of Christ in Highland. Burial will be in Highland City Cemetery. Friends may call Friday, from 4:00 – 8:00 p.m. and Saturday and from 9:00 a.m. until service time at the church. Memorials are suggested to the Evangelical United Church of Christ, Korte Recreation Center, or a charity of the donor’s choice. Spengel-Boulanger Funeral Home in Highland is in charge of arrangements.

He was a member of Evangelical United Church of Christ. He was also a member of Member of “Ozark Silver Swallows” (a retirement group) – former member of Highland Optimist Club – Airline Pilots Association.

Larry was born in Burlington, KY. At age 7 he moved to Erlanger, KY where he grew up and graduated from Lloyd High School. After graduation he worked briefly for the National Security Agency in Washington, DC, then worked for Boone County Aviation at the Greater Cincinnati Airport. In August 1963 he began flying for Ozark Airlines based in St. Louis. In 1972 he moved to the Highland area. He also began working as a check pilot for Ozark Airlines and TWA. He went on to become an FAA certified check pilot until his retirement in 1996. After retirement he worked in Flight Safety at Lambert Airport training new pilot candidates in the flight simulator, until 2002. His license certifications include DC-3, Martin-404, FA-27, FH-227, DC-9, and MD-80. He enjoyed golf, gardening, building grandfather clocks, visiting the Korte Rec Center, and spending time with his grandchildren. He also enjoyed classical and country music and liked Civil War history.