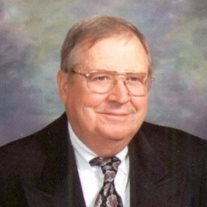 Leonard S. Niggli, age 84, of Highland, passed away Monday, August 18, at Eden Village Retirement Center in Glen Carbon. Funeral services for 84 year-old Leonard S. Niggli will be held Thursday, August 21 at 10:00 a.m. at the Grantfork United Church of Christ. Burial will be in the Grantfork United Church of Christ Cemetery. Friends may call Wednesday from 4:00 to 8:00 p.m. at the Spengel-Boulanger Funeral Home in Highland and Thursday from 9:00 a.m. to service time at the church. Memorials are suggested to Mooseheart Child City and School, Shriner’s Hospital for Children, or a charity of the donor’s choice.

He was a member of Grantfork United Church of Christ. He was also a member of Moose Lodge #2479 – Highland; Highland Sportman’s Club; Life member of Highland Pistol & Rifle Club; former member of Loyal Order of Eagles, Woodriver, IL.

Mr. Niggli was born North of Grantfork; grew up there; operated dairy and grain farm; quit farming in 1980. He drove school bus in the early 1960’s and 1970’s. He drove truck for Horn Trucking Company and others; retiring in 1990’s. He spent winters in Arizona for number of years; was active bowler and enjoyed golfing. In his early years, enjoyed going fishing.