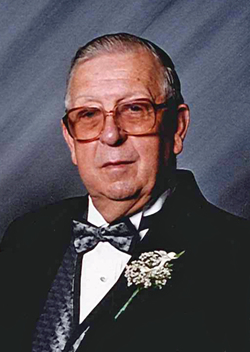 M. Wilson Fisher, age 80, of Carlyle, passed away Friday, August 22, at his home. Funeral services for 80 year-old M. Wilson Fisher will be Saturday, August 30, at 10:00 a.m., at the Zieren Day Funeral Home in Carlyle. Burial will be in McKendree Chapel Cemetery west of Keyesport with military honors. Friends may call Friday, August 29, from 4:00 – 8:00 p.m. and Saturday, from 8:00 a.m. until service time at the funeral home. Memorials are suggested to the donor’s choice.

He was preceded in death by his parents –Jessie and Matthew W. Fisher, Sr.; his wife – Darlene A. Fisher; a sister – Norma McClaren and husband Edward; a brother – Lloyd Fisher and his wives Linda and Helen; and his father and mother-in-law – Richard and Mildred Dresch.

Mr. Fisher was a veteran of the United States Army and a member of Immanuel United Church of Christ in Carlyle. He worked for Bond County F.S. for 24 years, managing the grain elevators in Keyesport and Mulberry Grove. He also raised sheep at his farm. Mr. Fisher served on the Clinton County Fair Board, the Carlyle North Water board and was member of the Carlyle F.F.A. Alumni and the Beckemeyer American Legion, Post 1227.