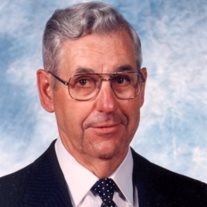 Melbern L. “Mel” Carrillon, age 86, of Highland, passed away Tuesday, August 26 at his residence. Funeral services for 86 year old Melbern L. “Mel” Carrillon will be Saturday, August 30 at 11:00 a.m. at the Evangelical United Church of Christ in Highland. Burial will be in Highland City Cemetery. Friends may call Friday, August 29 from 4:00 to 8:00 p.m. at the Spengel-Boulanger Funeral Home in Highland and Saturday from 9:00 a.m. to service time at the church. Memorials are suggested to the Evangelical United Church of Christ or the Highland Historical Society (Homestead Harvest Days).

He was a member of Evangelical United Church of Christ. He was also a member of Local 525 Teamsters; Local 600 Teamsters and a former member of Woodmen of the World Camp #105.

Mr. Carrillon was born in Lebanon, IL, and moved to Highland at age nine. He worked at Highland Box Board, Highland Ready Mix, Bellm Freight, and The Anderson Motor Company in St. Louis. He retired at age 61 on 7/3/1989, driving millions of miles accident free. He repaired clocks in his retirement, collected antiques, and always had a nice yard. He enjoyed his dogs, walking and visiting with neighbors and his red and white 1984 Chevy Silverado.