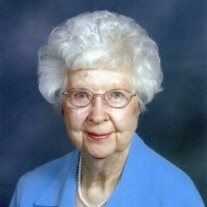 Opal B. Greer, age 103, of Greenville, passed away Friday, August 29 at Greenville Regional Hospital. Funeral services for 103 year old Opal B. Greer will be held at 10:30 a.m. Saturday, September 13 at the Greenville Free Methodist Church. Burial will be in Mt. Auburn Cemetery. Friends may call Friday, September 12 from 4:00 to 7:00 p.m. at Donnell-Wiegand Funeral Home. Memorials are suggested to the Free Methodist Church Building Fund.

Opal, daughter of Squire Hurst and Mary Effie (Carter) Seever, was born April 12, 1911 on a farm north of Mullinville Kansas in Kiowa County, where she spent her childhood and attended a country school and church. In the fall of 1925, she began her high school years at Central College Academy in McPherson, Kansas graduating in three years in 1928. On June 25, 1929, she married Robert (Bob) Marvin Greer, whom she had met at Central. They were married in Covington, Oklahoma and began their marriage journey in Enid, Oklahoma, Bob’s hometown.

They lived in Enid for the next 62 years. Bob was a businessman in Enid and Opal was a homemaker. During this time, they had three children: Arlene in 1931, Bob in 1932, and Dick in 1943. In August 1991, Bob and Opal moved to Greenville, Illinois to be closer to their daughter, Arlene. They purchased a home at 500 Maple and made a new beginning. Bob passed away September 12, 1995, and Opal continued living in Greenville. In May 2006, Opal moved to The Glenwood, an assisted living facility in Greenville.

While living in Enid, Opal was very active in her church and community. She was a faithful member of the Enid Hite Boulevard Free Methodist Church where she served in a number of capacities, which included the Official Board, Sunday School Teacher, advisor to the FMY, and Women’s Missionary Society, with a term as president. After moving to Greenville, she transferred her membership to the Greenville Free Methodist Church.

During Bob’s working life, Opal was always serving in a supporting role, being a wonderful homemaker, hostess, mother, daughter, sister, and friend. With Opal, her family, Bob, and her children came first. She was a “stay at home mom” before the phrase was ever coined. She was also active in community activities. With Bob as a member of the Enid Lions Club, Opal was a member of the Lioness Club, joining in 1949 and serving as president in 1965-66. She was also an active member of the Women’s Auxiliary of St. Mary’s Hospital in Enid. In 2003, Opal was honored by her alma mater, Central College. At the age of 92, she was recognized and inducted into the Academy of Achievers, an award that Bob had also received in 1971. Both Bob and Opal loved to travel and as a result of business and other interests, they were able to travel to many places around the world.

Opal had a long, rich, and rewarding life with faithful service to the Lord, her family, her community, and her church. She had many friends, was a friend to others, and possessed a wonderful sense of humor. In her later years, she was not as able to be as active as she had been. But even then, she saw her role as an “encourager” to others.