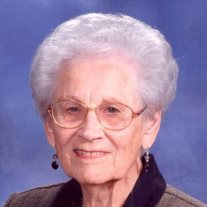 Agnes R. Kampwerth, age 89, of Highland, passed away Wednesday, September 24, at Faith Countryside Homes in Highland. Funeral services for 89 year-old Agnes R. Kampwerth will be Monday, September 29 at 10:00 a.m. at St. Paul Catholic Church in Highland. Burial will be in St. Joseph Catholic Cemetery in Highland. Friends may call Sunday from 4:00 to 8:00 p.m. and Monday from 8:00 to 9:30 a.m. at the Spengel-Boulanger Funeral Home in Highland. Memorials are suggested to masses, St. Paul School Educational Foundation, or St. Joseph’s Hospital Foundation.

She was born July 19, 1925, in St. Rose, IL, the daughter of William Anton and Wilhelmina (nee Tebbe) Benhoff.

She was a member of Saint Paul Catholic Church. She was also a former member of St. Anne Altar Society.

Mrs. Kampwerth was born and grew up on a farm east of St. Rose, IL. She worked at Moulton Bartley Shoe Factory in Highland for four years. After her marriage, she helped with the family farm northeast of Highland on Trestle Road. In 1982, she and her husband retired from farming and moved to Becker Road. After her retirement, she worked at St. Joseph’s Hospital for 17 years in the Housekeeping Department. She was an extraordinary minister at St. Joseph’s Hospital Chapel, volunteered at the hospital, and had been participating in perpetual adoration prayer at St. Joseph Hospital since 1993. She enjoyed quilting, gardening, playing cards (especially bid Euchre and Pinochle), and spending time with her children, grandchildren, and great grandchildren.