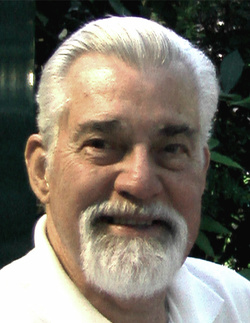 Bill was born in Carlyle, Illinois on September 26, 1926, the only child of Edward Alvin and Dorothy Mae Spaeth. He lived there until joining the US Navy after high school graduation at 17, near the end of WWII. Once honorably discharged, he attended Ohio State University as one of the first recipients of the GI Bill.

He was called home from OSU when his father passed away at 43. Bill and his mother took over the operations of his father’s weekly newspaper. In 1948, at 21, he was named the youngest Editor and Publisher of a newspaper in the U.S. After selling the paper, Bill became the protégé of wealthy entrepreneur, inventor, and “Oil Man” J.W. Menhall. Bill traveled the world developing oil deals, selling parking meters, and formulated enough stories to last a lifetime.

In 1955, he joined the advertising department of Falstaff Beer in St. Louis. He was transferred to Atlanta, Georgia in 1965 when Falstaff became the primary sponsor of the soon to be, Atlanta Braves. His career advancements led to VP of several advertising agencies responsible for the Lowenbrau, Schlitz, and Miller Beer accounts. As a large advertiser on radio and TV stations across the US, his Rolodex of corporate execs, celebrities, and politicians was highly sought after. His travels took him far and wide, yet he cherished small town memories.

Once formally retired in 1989, he supported his son’s entrepreneurial ventures developing new products, new markets, and customers nationwide. His positive attitude, integrity, knowledge, wisdom, loyalty, generosity, kindness, smile and stories were legendary, and benefitted everyone who knew him.

His long list of friends and family were amazed when they consistently received a birthday card, holiday card and phone call, all the way to the end. He was a “Rock of Gibraltar” for everyone in his life, and is sorely missed. Many knew him as “Wild Bill”, and in his later years, he followed that with “Tame Willy”.

His faith was unshakable and supported by one hour of daily prayers, every single morning, as the list he prayed was long, vast and always growing.

He leaves his wife Dott, and children Diana “Dee” Sechelski, Edward W. “Eddy” Spaeth II, Carla McDougal, and John Spaeth. Dott and Bill lost a child, Stephanie, at birth. He also leaves behind many grandchildren and great grandchildren that he loved dearly.