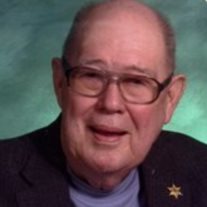 James O. Stever, age 78, of Greenville, passed away Monday, September 15 at his home. Funeral services for 78 year old James O. Stever will be held Friday, September 19 at 11:00 a.m. at Our Redeemer Lutheran Church in Greenville. Burial with full military honors by Greenville V.F.W. Post #1377 will be in Mt. Auburn Cemetery. Friends may call Thursday from 4:00 to 8:00 p.m. at the church. The Donnell-Wiegand Funeral Home is in charge of arrangements.

James Oliver, the son of Melvin “Dag” and Gladys (Young) Stever, was born July 5, 1936 in Greenville, Illinois. James grew up in Greenville, attended the local schools and graduated from Greenville High School with the class of 1954. He went on to attend Greenville College and got his Bachelor of Science Degree in Business Administration.

Mr. Stever enlisted in the United States Army Reserve in 1959. He was active duty, Ft. Leonard Wood, Missouri from 1959-1960. He rose to the rank of Sergeant First Class. Jim was honorably discharged in 1966.

Mr. Stever was employed by the State of Illinois, Illinois State Police, October 1957-December 1988. Jim graduated from the Illinois State Police Academy as a Trooper and assigned to District 11 in 1957. He was promoted to the rank of Corporal in 1967, Sergeant as Shift Commander in 1971, appointed District Administrative Officer responsible to the Commander in 1974, promoted to the rank of Lieutenant 1978 and was the District Field Operations Commander from 1983 until his retirement in 1988. Mr. Stever was appointed Investigator for the Bond County State’s Attorney and worked there for 21 years. Mr. Stever had a total of fifty-two years in Law Enforcement.

He is survived by his children: Jennifer (Brian) McGill of New Castle, Colorado, J. R. Stever and wife Alison North of Highland, Michael (Cheryle) Meyer of Vandalia, IL, Martha Kimber of Richmond, VA and Mary J. (Johnny) Hawley of Richmond, VA. Loving grandfather of 14 and great-grandfather of 8. James was preceded in death by his parents, wife Dee and a brother Melvin Eugene Stever.