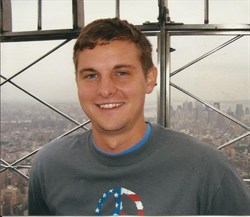 Larrey Walton Gale, age 31, of Vandalia, passed away Monday, September 1. A funeral mass of Christian Burial for 31 year old Larrey Walton Gale will be Saturday, September 6 at 10:00 a.m. at the Mother of Dolors Catholic Church in Vandalia. Burial will be in Fairlawn Cemetery in Vandalia. Friends may call Friday, September 5 from 5:00 to 8:00 p.m. at the Mother of Dolors Parish Hall. Memorials are suggested to the Larrey Gale Memorial Fund. The Hohlt and File Funeral Home is in charge of arrangements.

Larrey was born June 21, 1983, in Parkersburg, WV, the son of the late Dr. Larrey Gale and Cheryl Walton Gale. He attended Vandalia Community Schools, St. Anthony’s HS in Effingham, John A. Logan College, and SIU Carbondale. He was a member of Mother of Dolors Catholic Church in Vandalia, where he was mentored by his beloved friends Jackie DuPlayee, Cheryl Sasse, Fr. Steve Sotiroff and Fr. Joseph Havrilka, and also by his aunts and uncles. Larrey was especially beloved by his grandmother Helen Walton. He was employed by Wildlands Outdoor Equipment in Vandalia. His greatest pleasures were spending time with his friends and family, playing his guitar, cooking, shooting pool, cheering for the STL Cardinals and San Antonio Spurs. He had a great love for the community of Vandalia, and it was his sincere desire to spend his life here, marry and raise a family.

He was preceded in death by his father Dr. Larrey B. Gale, grandparents Dr. George and Carolyn Gale and Slater and Helen Walton.