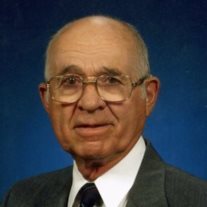 Marion “Boze” Brown, age 87, of Pocahontas, passed away Tuesday, September 2, in Highland Healthcare Center. Funeral services for 87 year-old Marion “Boze” Brown will be held at 11:00 a.m. Friday, September 5 at the First Congregational Church in Highland. Burial will be in Robinson Cemetery with military honors. Friends may call Thursday from 4:00 to 8:00 p.m. at the church. Memorials are suggested to the First Congregational Church in Highland or the Pocahontas Fire Department. The Donnell-Wiegand Funeral Home in Greenville is in charge of arrangements.

Marion Gillespie, the son of Mathias Rudy Brown and Florence O. Gillespie Brown, was born April 11, 1927 in Pocahontas, Illinois. He attended the local schools and graduated from Pocahontas High School. He missed his high school graduation to start boot camp and serve our country during WWII in the United States Navy. Boze was enlisted on May 14, 1945 until he was honorably discharged on June 26, 1946. He was studying Navy Navigation at Duke University and after the war moved to Michigan where he worked for the railroad.

On August 20, 1946 Boze was united in marriage to Shirley Elizabeth Ziegler. They later divorced. He then attended Greenville College and studied physics and math. Mr. Brown worked for over 39 years at the Bond County State Bank. He retired in 1988. After his retirement, he worked for the American Banker’s Association for 5 years.

Boze was the last of his generation; he was preceded in death by his parents and his siblings George Brown, Stanford “Duck” Brown and Mary Ann Truebe.