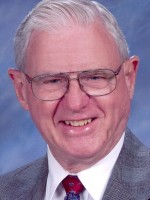 Reverend Junior “JR” Heikes, age 78, of Glenarm, former pastor of the First Baptist Church in Greenville, passed away Friday, September 12. Funeral services for 78 year old Reverend Junior “JR” Heikes will be Tuesday, September 16 at 11:00 a.m. at Central Baptist Church in Springfield, IL. Burial will be in Highland Garden of Memories in Belvidere, IL. Friends may call Monday from 4:00 to 7:00 p.m. at the church. Memorials are suggested to the Central Baptist Church or Lake Springfield Baptist Camp. The Staab Funeral Home in Springfield is in charge of arrangements.

He was born March 18, 1936 in Colchester, to Randolph and Lola Hagan Heikes. He married Janet Louise Wimberly on August 15, 1959, and she preceded him in death on April 16, 1991. He later married Faith Schumacher Williams and she survives.

Preceding him in death were his first wife, parents, and step-father, Ralph Carson.

He was a resident of Glenarm since 1998, previously living in Edwardsville. He served as minister at the First Baptist Churches in Edwardsville, Greenville, Oak Park, Carrollton, Andalusia, and Cornell. He also served a number of interim pastorates following retirement. He was an interpreter at New Salem Park, a member of the Rotary in Edwardsville, President of the Great Rivers Region Ministers Council, very involved with American Baptist Camping, Habitat for Humanity, and enjoyed reading and traveling.