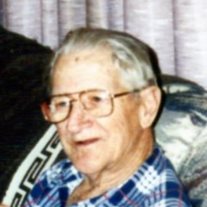 Robert E. Frank, age 87, of Greenville, passed away Thursday, September 4, in Helia Healthcare. Funeral services for 87 year-old Robert E. Frank will be held at 11:00 a.m. Monday, September 8 at the Donnell-Wiegand Funeral Home in Greenville. Burial will be in Hazel Dell Cemetery with military honors. Friends may call Monday from 10:00 a.m. to service time at the funeral home. Memorials are suggested to the Greenville First Christian Church.

Robert Earl, the son of George and Mable Whitton Frank, was born August 11, 1927 in Greenville. Robert grew up in Greenville and attended the public schools. He went to work for the railroad a short time, worked for the city of Greenville and the Highland Box Board Company. Mr. Frank started his own business and owned and operated Frank Sinclair Station in Greenville. Robert then worked for the State of Illinois for 19 years as the maintenance supervisor. He retired in 1992. Robert loved the St. Louis Cardinals and enjoyed bowling.

Robert was preceded in death by his brothers Leo Frank and George William “Bill” Frank and a sister Doris Sturgill.