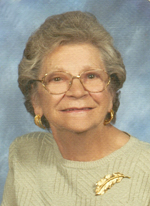 Theresa A. Jones, age 84, of New Baden, passed away Monday, September 8. A funeral mass for 84 year old Theresa A. Jones will be held Saturday, September 13 at 11:00 a.m. at the St. George Catholic Church in New Baden. Friends may call Saturday from 9:30 to 10:30 a.m. at the Hempen-Nordike Funeral Home in New Baden. Memorials are suggested to the St. George Church Building Campaign, the New Baden Lions, or the New Baden American Legion Auxiliary.

In addition to her parents and husband she was preceded in death by a son, Michael Jones; two sisters and one brother.

Mrs. Jones was a retired Healthcare RN. She was a member of St. George Parish in New Baden, the New Baden Lions Club, and the New Baden American Legion Post 321 Auxiliary.