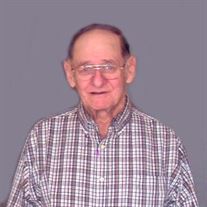 Derl Monken age 82 of Highland passed away Friday October 24 at the Anderson Hospital in Maryville. A celebration of life for 82 year old Derl Monken will be Thursday October 30 at 12:00 at the K.C. hall in Highland. Private graveside services will be Thursday at the St. Joseph Catholic cemetery. Spengel-Boulanger funeral home in Highland is in charge of the arrangements. Memorial contributions may be made to Charity of the donor’s choice or to the Family.

He was born August 25, 1932, in Highland, IL, the son of Lester Louis and Mathilda (nee Donnelly) Monken.

On November 29, 1958, he married Rosemary M. Dickhaut who survives.

Derl was born at Highland, and attended Highland Schools. He served with the US Army from 1952-1954. He worked in the oil fields is South Central IL, and later operated a tavern in Summerfield. In 1957 he started working at Highland Machine and Screw. He worked for almost 40 years, before retiring in 1996, as a painter. He enjoyed gardening, mowing grass, playing cards, word-find puzzles, and spending time with his grandchildren.