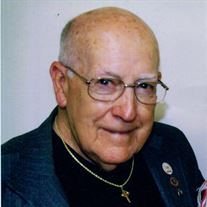 F. Clayton Edwards, age 87, of Mulberry Grove, passed away Monday, October 13 at Hillsboro Area Hospital. Funeral services for 87 year old F. Clayton Edwards will be held at 11:00 a.m. Thursday, October 16 at the Mulberry Grove Methodist Church. Burial will be in Mulberry Grove Cemetery with full military honors by American Legion Post 1180 of Mulberry Grove. Friends may call Wednesday from 5:00 to 8:00 p.m. at the church. Masonic services will be performed Wednesday evening by Gilham Masonic Lodge #809 AF & AM. Memorials are suggested to the Methodist Church or to American Legion Post # 1180. The Donnell-Wiegand Funeral Home is in charge of arrangements.

Fred Clayton Edwards, the son of Fred Edwards and Ruth Nellie Ellsworth Edwards was born on July 11, 1927 in the Edwards Home at 301 Pierce where Clayton has lived his entire life. He grew up there and attended the Mulberry Grove and Roxanna Public Schools. Early in life Clayton was a truck driver and taxi operator. Clayton answered his countries call be joining the United States Army Air Corps serving two enlistments from November 21, 1945 until May 28, 1946 at Kelly Field and from May 29, 1946 until June 29, 1947, rising to the rank of Sgt. Clayton was awarded the American Theater Ribbon and the World War II Victory Medal. Clayton returned home to Mulberry Grove where he worked for Vandalia Correction Center, owned and operated a school bus for the Mulberry Grove Schools for 8 years, worked construction for Teamsters Local, was a Security Guard in Springfield for the Illinois Treasurer’s Office at the Illinois State Capitol Building, returning to teamsters and construction from which he retired. Clayton had sung for over 40+ years in the Plainsmen Quartet, the Cordaires Quartet, at weddings, funerals and various gospel gatherings across Illinois. In retirement he enjoyed going to Pittsburg and singing with Ed Rickman’s Band.

Clayton is the last of his generation being predeceased by his brother Forrest Edwards and his sister Norma Edwards in infancy.