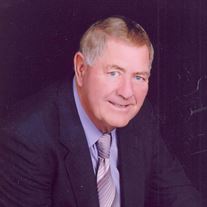 Joseph G. “Butch” Geiger, Jr., age 77, of Highland, passed away Friday, October 24, at St. Joseph’s Hospital in Highland. Services for 77 year-old Joseph G. “Butch” Geiger, Jr. will be Wednesday, October 29, at 10:00 a.m., at St. Paul Catholic Church in Highland. Burial will be in St. Joseph Catholic Cemetery, also in Highland. Friends may call Tuesday, from 4:00 – 8:00 p.m. and Wednesday, from 8:00 – 9:30 a.m. at the Spengel Boulanger Funeral Home in Highland. Memorials are suggested to the Madison County Extension Education Foundation, HACSM, or the Madison County Fair Association.

He was born February 22, 1937, in Highland, IL, the son of Joseph Felix and Ida Bernadine (nee Woltering) Geiger, Sr.

He was a member of Saint Paul Catholic Church where he had served on the Finance and Community Relations Committee; Charter Member of Highland Jaycee – past Chairman of the Board; Charter Member of Highland Moose Lodge #2479; Knights of Columbus Council #1580 in Highland, IL;
Madison County Fair Board – Past President twice; Madison County Pork Producers; Madison County Ag Council; 4H Club Leader – 30 years; Helvetia Township Trustee and current Supervisor; Coached Optimist Basketball; Coached Khoury League Baseball; 8th grade Religious Teacher at St. Paul Church over 10 years; Played fast pitch softball for many years.
Joseph grew up on the family farm, Southeast of Highland, which has been in their family since 1892 and is registered as an IL Centennial Farm. He was a 1955 graduate of St. Paul School. He served in the US Army. When he returned home, he raised grain and livestock. He was still active with the daily farm operation. He enjoyed watching sports, following his children and grandchildren with their sports, and liked helping others any way he could.