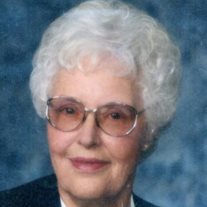 Ruth M. Woker, age 82, of Greenville, passed away Tuesday, October 7. Funeral services for 82 year-old Ruth M. Woker will be held Saturday, October 11 at 1:00 p.m. at the Donnell-Wiegand Funeral Home in Greenville. Burial will be in Mt. Auburn Cemetery. Friends may call Saturday from 10:00 a.m. until service time at the funeral home. Memorials are suggested to Our Redeemer Lutheran Church, the Greenville College Music Department, or the St. Paul’s Lutheran School in Troy.

Ruth Marilyn Ackerman, the daughter of Carl William Ackerman and Melanie Theiss Ackerman, was born on July 15, 1932 on the Ackerman farm near Troy, Illinois. She attended the one room schools nearby and after moving into Troy attended St. Paul’s Lutheran Day School.
Early in life Ruth worked as a clerk at Famous-Barr in St. Louis. She later worked as a nurse’s aide in the OB department at St Joseph’s Hospital in Highland for many years. Ruth raised her family on the farm and helped her husband in its operation. Ruth then worked at food service at Bond County Community Unit # 2 for many years. She last worked for Greenville College for 21 years just retiring in December of 2012 when she was 80.

Ruth is preceded in death by her parents Carl and Melanie Ackerman, her husband Lloyd Woker on March 8, 2009, and two brothers Donald Ackerman and William Ackerman.

Ruth was a competitive roller skater, enjoyed league bowling, and a faithful member of her church, the Our Redeemer Lutheran Church.